X-Wing is cool. X-Wing is fun. Some of us just like getting together with our friends and a few beverages to play a round with house rules, others know no greater thrill than making the cut at a major tournament. It’s worth celebrating how many different ways we enjoy collecting and playing with our fully licensed plastic and cardboard. Welcome to the Dice and Cardboard Cantina, where we chat about what makes X-Wing fun and, well, just about everything

For the past few weeks I have been incredibly busy with work and a few related things in my life so, by the time my usual Monday night meetup at the FLGS (Friendly Local Game Store) comes along my brain has been just fried. My current favorite squad, a 6-ship Empire list with Lyttan Dree, Commandant Goran, Nash Windrider, and some low-initiative Interceptors with Sensitive Controls, demands a degree of focus and precision that just hasn't been realistic for me to expect of myself lately. With this in mind I've tried to put together a couple of simple squads with few triggers or unusual abilities, reasonably simple activation, and the ability to bounce back from a mistake or two. Unsurprisingly I immediately reached for one of my favorites, that unremarkably solid workhorse and namesake of the game, the X-Wing.

Coming up with lists that are relatively simple to manage but can still win games was a fun exercise, so I thought we'd talk about it this week!

This was my first attempt at this concept and I'm pretty happy with it. I know that it's possible to actually build 5X but I wanted to have Wedge, which made it necessary to cheat a bit and include Blount in the Z-95. There's an argument to be made for including Derek Klivian in the A-Wing but I simply decided I didn't want to. Additionally, I generally use Vectored Cannons on Klivian and the Systems Phase action doesn't fit the concept. Instead of adding the A-Wing I compensated by putting Afterburners on Jek and Thane and bringing everyone's favorite gunslinger, Kullbee, to give the X-Wing squad a bit more giddy up. This combo made it feel like the three middle X-Wings were all, essentially, functionally very similar. Nice and simple!

I played two test games with this squad and managed to win both, but only remember one (sorry...). We rolled Salvage Mission as our scenario and I was up against a nasty First Order squad with Gideon Hask supporting some TIE/fos and /sfs and Major Vonreg thrown in for good measure. I flew Thane and Jek together with Kullbee nearby to allow two to support each other at all times and protect the third while it went for objectives and set Blount up on the outside to turn in and shoot into the furball to trigger his ability. I waited to the end of setup to decide on Wedge's spot and set him up on the flank to make the opponent choose between exposing their ships to him or the rest of the group. It worked pretty well! I grabbed the two crates on my side of the board and threatened the one in the middle and Afterburners came in handy for objective grabbing. My friend sent most of their ships into the middle, wary of Wedge being bait, and turned Gideon Hask's back to Wedge, allowing our cherished ace to run wild with his Proton Torpedoes and Outmaneuver while the others took a lickin' and kept on kickin'. I was prepared to set Thane up to protect Wedge but ended up being able to really put my opponent's vital squad pieces between a rock and a hard place by spreading 3-dice arcs all over the table. I don't remember much of my other test game with this squad and haven't tried all of the scenarios, but this list was nice and simple to just play over a beer or two after a long day. Surprise, X-Wings are good!

I mean, I'm on the record saying T-70 X-Wings are good. Period. 4 strong ships, just 3 different initiatives, and a scary ace who is fun to fly sounds like a good time to me. My one concern was that 4 wouldn't be enough but it ended up not being too much of an issue in the one game I've gotten to play with this one. There are some more unusual abilities in this one and, of course, I forgot to use M9-G8 to lock a friendly in the beginning of the game but Snap's HLC and R6-D8 were just brutal after using his free boost to line up the bullseye. Not too sure about Advanced Optics but my red dice were on fire, so it may come in handy under different circumstances.

I tested this squad against the same friend with a 6-ship Separatist list with Grievous and mine-carrying Bombardment Drones. Ew. We also drew Salvage Mission again so I was concerned that my 4 ships wouldn't be enough to play the objectives, especially being down by two bodies from the start. Luckily the scenario and the threat of Poe's torpedoes discouraged them from landing the droids on debris and I was able to grab my two "free" crates near my setup and then focus on blastin' and...surprise, X-Wings are good! In my opponent's defense, again, my red dice were pretty hot. Turns out the best way to ensure good red dice is to roll a lot of them. Poe was able to knock Grievous' shields off early in the game and force him out of the fight briefly, allowing me to focus fire and pick off bombers one by one. Unfortunately for the droids, the bombers were also the ones carrying objectives. Grievous got back in the game and hunted down poor Jaycriss Tubbs after he had a Conner Net dropped on him, making him reenact his fiery death from the film, but in the meantime Poe was able to swing back around from his run up the left side of the table and finish off a Drone to win the game while C'ai and Snap held on to objective tokens. Hardly a scientific test (one game) but the X-Wings were fun to fly and mostly fuss-free aside from me sending C'ai after an objective round 1 and forgetting to take a lock. 4 ships wasn't too much of an impediment to playing the scenario since they were so powerful: I was able to grab what I needed and then keep enough pressure on the enemy to keep them focused on the fight.

There you have it! Two squads of good clean fun that seemed to work out pretty well. Variance definitely helped me out a bit in at least one of the games outlined above but I can say with some certainty that had I tried to use a more complicated list either of those days I was tired enough that I would have been sloppy to the point of embarrassment and it would not have been a rewarding experience for anyone.

What are your favorite squads/combos to use when you just know you need to cut yourself some slack? 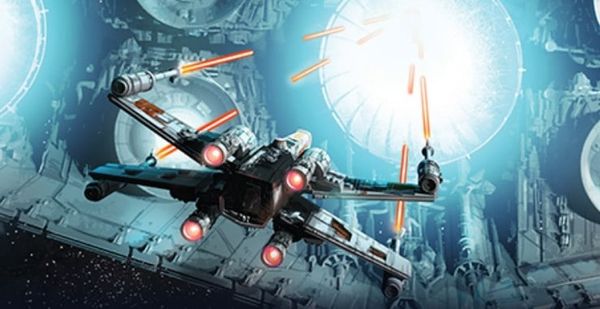 Welcome to The Hangar, pilot! In this series we talk about starfighters, freighters, shuttles, racers, bombers, gunships, and everything else in between. This is the chance to look "under the hood," as it were, and explore what makes our favorite ships great. Overview The Incom Corporation's T-65 X-Wing is a This post is inspired by a recent Reddit thread that I felt was very insightful into the hobby of miniatures wargaming. Burnout is very real when it comes to a tabletop game. There are very few games that I have never gotten tired of, even if I'm only ever tired