It's no secret that one of my my favorite parts of Star Wars: X-Wing is Stars Wars. And X-Wings! I'm excited to see the thematic, just-for-fun elements of this game brought to the fore with the upcoming Battle Packs from AMG.

Before we get some more "official" options for cinematic squad building I thought I'd take a pass at building one or two themed squads for each on-screen canon installment of the Star Wars saga. I'm guessing it won't always be easy but the goal is to build a squad that may not be fully competitive but decent enough to put on the table and use. Let's start with the Prequel Era!

Well, if you have read my first post on this site you'll know that I love the Naboo N-1 Starfighter. Here we have just about all of the Phantom Menace characters from the Republic faction that I can fit in one list. I know, it would be more thematic to put R2-D2 on Anakin but that would leave Obi Wan with fewer options and restrict Ani's loadout. I've actually won a couple of games with this squad! Make sure you keep the N-1s going fast and let Obi Wan mop up their leftovers.

Okay, full disclosure, this one was a bit tough and I didn't think it would fit. But it does and it looks super annoying! Maul can be a powerhouse and the TFDs get locks from the DRK-1s. I think it would work?

Attack of the Clones

Okay, this movie got tricky because we don't really see many characters fly outside of Obi Wan and some gunship pilots. But what gunship pilots we get! I have Hawk built as an attacker, getting double taps out of the side arcs from the turret and Ghost Company and nasty rocket shots from the front. Hound supports and buffs the attacks of the others. 212th is...there because I didn't have another 5pt LAAT. I guess we could have put Padme in the N-1 in that last 5-point slot instead since she (SPOILERS!) flies it in the opening scene. Obi Wan's build here is, first of all, pretty much identical to how he flew in the asteroid field fight with Jango, and second of all pretty acey and hard to catch.

Jango, Zam, and Boba in the Firespray with Seismic Charges and Concussion Missiles seems pretty true to the film and actually good. Dooku supported by Palpatine is...about as good as he'll get I suppose. Chertek is the best Nantex I could find to escort Dooku that fits in the list. Feels like Jango could carry this squad but at least it would be okay?

It doesn't get much more Clone Wars than Anakin and Ahsoka and a bunch of clones! I'd have liked them both in the tougher Delta-7B but having just Anakin let me fit more clones and he is an absolute monster in that ship, especially with this build. I thought about including more named clones from the series but, since this is the only on-screen appearance of the Clone Z-95 I decided to highlight that ship. Tarkin is here to help the Zs pop their missiles off and because he featured heavily in a story arc in the series. If you don't care as much about keeping Tarkin in there then Klick would be a good replacement to support the Jedi. Anakin and Ahsoka are your power pieces but if the opponent goes after them then they can be supported by the clones. Wholesome!

I tried to incorporate a couple of different story arcs from the series here while keeping it playable and here we are! If you drop Bo-Katan's commandos then you can potentially have 9 firing arcs on the table. The Vultures are there both to spread Buzz Droids around (I love those little guys) and to trigger Cad Bane's ability. Additionally, Hondo crew on the Gauntlet doesn't mind jamming a Vulture that has two calculate tokens from Independent Calculations. I know I'm a relatively inexperienced CIS player and tend to default to Vulture swarms, but this one seems like it could be pretty nasty. I really wanted to include something different like HMP Gunships (too many points) or Hyena bombers (didn't quite fit properly).

Revenge of the Sith

So the first three ships in this list were non-negotiable and we'll almost certainly get fun new thematic versions of them in the Battle of Coruscant pack. Mace is there along with Commander Cody gunner to represent the rest of the film and because he's, in my opinion, the best option at 4 points.

This one also leans heavily on the Battle of Coruscant. Grievous and his MagnaGuard Protector are supported by the Tri Fighter and Vultures that chased Anakin, Obi Wan, and Oddball.

Not too many ship options for us in this one, unfortunately...

Just kidding, not even going to attempt this one. We really didn't get any X-Wing options here.

Would you fly any of these lists? What's your favorite thematic squad from the Prequel Era?

Tune in next week when we hit the Original Trilogy Era!

I've been behind in my analysis on the new units coming out this fall, but as AMG starts revealing the remaining cards and units I'm going to hop back into it! So grab your beskar, do the little hand thing, and get your armor back from some Jawas, we're gonna

Welcome to The Hangar, pilot! In this series we talk about starfighters, freighters, shuttles, racers, bombers, gunships, and everything else in between. This is the chance to look "under the hood," as it were, and explore what makes our favorite ships great. Sorry I missed last week! A busy work 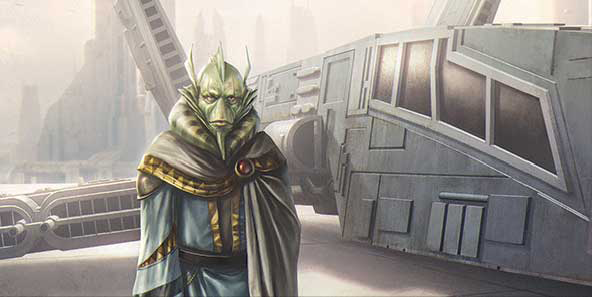 Welcome to the Dice and Cardboard Briefing Room, pilot! In this series I'll write about a pilot or upgrade that I've been experimenting with or enjoying. The subject of this week's article is a fixture of Scum and Villainy. It's Gamut Key! Gamut has always been a popular choice in